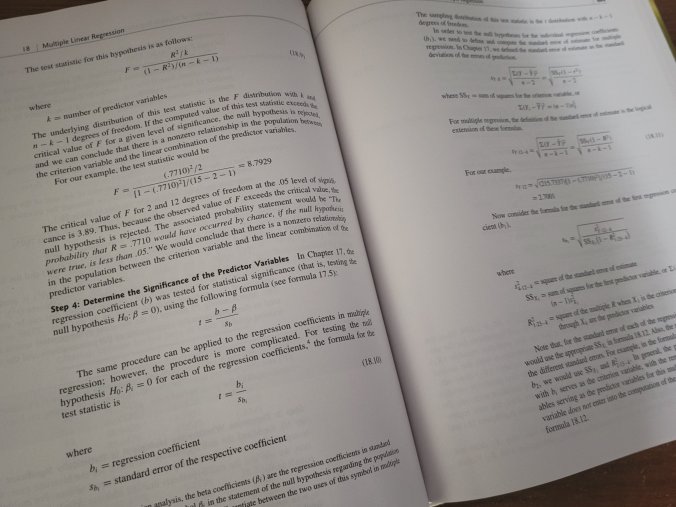 In graduate school I had a very intelligent professor who taught Statistics. He was so intelligent that much of the time he did not speak in a language that his students could understand. I tutored many of the other students in my class, but there was one student who did not come in for help. This was his second time taking Statistics, and I think he had all but given up. It was like there was a heavy fog between what the professor was saying and what he was hearing. It was impossible for him to comprehend both the equations and the instances when those specific statistical equations should be used (it may have been that he was on ESPN.com as well). He did not speak or understand the language.

Session four for me was a lot like sitting in Statistics class for my classmate.
At the start of session four, my therapist and I (my therapist and me? – see below for the reason I have no idea what to write here) went over a few of my ABC sheets from the previous week. The activating events and beliefs or stuck points were fairly easy for me to identify and write about, but I had a little more difficulty identifying how I felt about each of those things. Sometimes I would be able to identify something primary like guilt, but other times I would identify a secondary emotion such as worthlessness. My therapist would question the emotion and attempt to help me understand that the feeling of guilt would be a natural result of the belief whereas worthlessness would require additional thoughts and beliefs to make the jump.
I mentioned before that I wanted to answer one of the questions at the bottom of the ABC sheet, “Is this thought realistic or helpful?” with a “yes.” I followed the rules to “use logic” and wrote “no” each time, but it is very difficult to make myself believe that is true when it has been my truth for years. Because of that, my greatest difficulty when going over my ABC sheets was a question that my therapist asked me about from the completed form. “From 0% to 100% how much do you believe that?” Ugh. I mean, some of them I could get 80% or 100%, but I am pretty certain that some of these worksheets are going to be near 0%. How do you stop believing something you have believed for so long when it feels so true? She (my therapist) tells me, “A feeling is not a fact.”

So, if going over the ABC data sheets for me was like finding the standard deviation for my classmate, the next part of my session would be like understanding ANOVA and CANOVA. If you don’t know what that is, my point is already made.

Insert “Challenging Questions Worksheet” here. My therapist and I (me?) started to go over the first one together. The worksheets are 10 questions and come with several examples on how to fill them out as well as a guide sheet. I made it through the first two questions with my therapist. She asked me the third question, and I was stumped. She reminded me of the examples and guide sheet and had already gone over the questions with me, but it was the end of the session. I would need to complete the rest of this worksheet (and at least one every day for the week) on my own.

By the time I arrived home, I had about one hour to work on my worksheet before picking up my son from school. I sat for the entire hour staring at the question, reviewing the examples, and reading and rereading the guide for the question and came up with nothing. There is no avoidance here this time. This feels like stupidity. I have no idea how to answer these questions.

I keep getting stuck. One of the questions attempts to clarify any additional details in the incident. The point is to notice that what I think I did is only part of the story. There were other factors that I am likely ignoring. However, each time I get to this question I think about the process (and not the one I am trying to trust). In my thinking, Person A does not assault Person B because person B made one poor choice. Chances are, Person B (myself) made a series of poor choices. You do not get from the ground to the roof of the house with a step ladder. You get from the ground to the roof with an extension ladder. Each rung of that ladder was another choice I made. So, instead of looking at each individual stuck point, I am overwhelmed by all of the stuck points collectively.

When I was a freshman in college I had my first grammar class ever. No, I was never in a grammar class from Kindergarten through 12th grade. I would show up to run at 6:00AM with my soccer team, and either before or after the run one of my teammates would tutor me. She would either explain the work to me and help me as I completed it or go over my homework and explain why some answers were right and others wrong. The “Challenging Questions Worksheet” is equivalent to the grammar homework I had to complete or the Statistics work my classmate had to try to understand. So, I think I need a tutor who can sit with me daily and question my poor logic and point me back to one stuck point at a time, or at the very least, they could repeatedly stomp on my toe and shout, “feelings are not facts,” until I believe it.