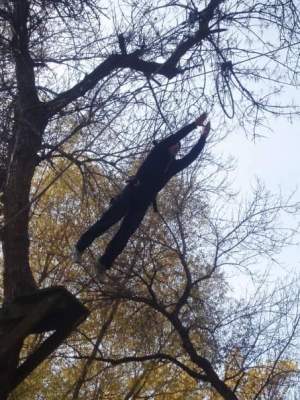 I’d like to think I was compared to Robbie Knievel the other day, but I guess I should admit that my therapist was actually comparing the process of EMDR to Robbie Knievel’s famous Grand Canyon jump (start at 35:35). Her analogy: Robbie used the throttle perfectly to make his jump across the canyon successful. If he pulled back on the throttle too much, he wouldn’t have made it to the other side. I have apparently, well, obviously, been throttling back in my EMDR sessions. I know holding back is going to keep me from getting across my canyon, and I don’t want to be outdone by some badass daredevil who hit 92+ mph at the top of a ramp and dropped 45 feet down while gliding 228 feet across to a rough but successful landing (he broke his leg – “a mere flesh wound”). I can be a badass like him.

When I was asked in a recent processing session if I thought I could keep going with EMDR, I thoughtfully considered a physical leap of faith that had already challenged me to persevere through other emotionally and mentally difficult situations.

I went to a high ropes course every other Friday while I was in Utah. The course instructors always talked about a concept called “challenge by choice.” All they asked was that I (and everyone else) push myself to my own limits. My last Friday at the course was an activity I had watched others do previously and had no intention of doing, ever. There was absolutely no way I was going to change my mind on this.

In front of me was a pole that stood forty feet high with climbing pegs and a small platform at the top. The ultimate goal was to climb to the top, stand on the ledge, jump in a full extension – out and up – to grab and hang from a ring suspended in the air. My friend, Maran, immediately grabbed a harness. She climbed to the top and jumped with the confidence and delight of a five-year-old jumping from a six-inch curb into a mud puddle. Neither her ease nor her joy made me feel better about taking the risk, but it sparked my need for adventure. That spark short-circuited my brain, and when I started thinking again, I realized Maran was buckling my harness while I was tightening it. The instructor asked me what my goal was as I stepped up to the pole. What else could I say? “I’m going all in. I’m going to jump.”

With each peg that I grabbed, I pulled myself up a little closer to the top. At forty feet, my foot swung around, and I stood on the platform. It seemed much smaller than it had appeared from the ground, and the ring was now much farther away too.

I took one last look at the ring and concluded that I wouldn’t be able to reach it, so I took a deep breath, closed my eyes, and jumped – no stepping or hopping off. Even though the ring was outside of my reach, it was a full effort jump. I had to free fall several feet before I felt my harness tighten and the rope attached to it become taut.

Robbie had the courage to jump the Grand Canyon because he built up confidence with his previous stunts. My leap of faith was a physical stunt that has given me the courage to mentally and emotionally launch forward into several mentally and emotionally challenging situations. EMDR would be one of those things. I told my therapist I could and would keep going. Challenge by choice.

My target (the image/event that causes me distress) has been the same in each of my sessions. I would close my eyes and focus on the same point in a memory, but as it played out, I would suddenly feel as though the thoughts and sensations were too much and shut everything down. I don’t think I was doing it intentionally. I would feel frozen, panicked, and incapable of allowing the memory to move forward.

As I sat down in the therapy office for my fifth (?) session, I was already bracing for the inevitable mental, emotional, and physical chaos and pain. My therapist handed me the tappers, but instead of giving me the same target, she said the name of the person connected to the trauma I was working through. This left the process wide open. My brain had the freedom to do what it wanted, and I didn’t trust it. It would be unfamiliar, unpredictable, and uncomfortable.

When my eyes closed, images, scenes, and storylines flashed by so quickly that nothing made sense. My body was reacting violently to things that I couldn’t actually grab ahold of and make sense of in my brain. Oddly, those were more distressing than the painful and unwelcome memories that were clear. Even so, the unwelcome images didn’t seem to fully connect with each other and were rapid-fire daggers. I was in a bathroom, a counseling center, my bed, a basement, standing in front of a mirror, sitting at a desk, having a conversation, swimming in a pool, showering, listening to a conversation, and watching Kill Bill at a friend’s house. Suddenly, I saw the face of a man who gave me strange, mixed feelings, unlike the other images. I felt intense anger, but it was combined with a deep longing.

The intensity of the anger and longing persisted unceasingly for days as the man’s face swam in my mind over and over again. He (I will call him Rich) was a badass. Rich did things most people would never imagine doing. He hiked massive mountains in foreign countries, taught martial arts to soldiers, fought in a war, wrote books, biked through several U.S. states, and participated in well-known demonstrations.  He pulled himself out of bankruptcy and became a wealthy man who made connections, met famous people, and traveled where he wanted.

Rich was a highly successful therapist by his own report, and he measured his success by never hospitalizing one of his clients, among other things. That was one of his standards for best practice, and I know a therapist or two who could have benefited from a conversation with him. But, I would argue that he was wrong about a couple things. 1. Hospitalizing someone can be best practice for some people. 2. I was hospitalized under his care. I guess He didn’t “officially” hospitalize me, but he told my roommates how to go about filing a report with the police. His instructions led to a ride in the back of a police car, an emergency room visit for an evaluation, and a transfer to a psychiatric hospital where I stayed for one week.

Being hospitalized that first time never bothered me, but I started to re-think that when I thought about Rich’s standards (and my personal situation) after his face came up in my EMDR session. Maybe Rich isn’t just a badass. Maybe he is also deceitful, or worse yet, deceived. Maybe he is a coward. A coward doesn’t do difficult things, and maybe his inability (unwillingness?) to do those hard things has hurt people, more than he realizes.

I once came to Rich because I needed help with something. I shakily sat on his ugly maroon couch that day and prepared myself to speak about something awful. Our conversation went like this: I told him I thought I had been raped. He asked, “What did you do? What was your part in it?” I gave him some details about what happened leading up to it as he sat and listened with an occasional head nod. He told me if it ever happened again he would send the person out of state. As I stepped out the door, Rich asked me if anyone else knew. My memory flashed to the day before. I had asked a friend if I could come and stay at her house. I was dissociative but told her what happened and ended up watching both volumes of Kill Bill in her living room. Re-entering the present moment and the awareness I was still sitting on the maroon couch, I gave Rich the name of my friend. He said he would tell her not to say anything.

But I believe Rich was wrong about this too. I know I didn’t consent, and if he had acknowledged that I was raped, I may have been protected. I may have lost the future I thought I always wanted, disappointed family, or lost friends in the process, but I would have been safe.

Things could have been different if he understood I didn’t consent. Actually, they should have been different. I had a right to be understood and validated. I should have been protected from experiencing a second rape by the same person, but I wasn’t understood, validated, or protected. I am angry, full of rage, sad, and grieving. I want the life back that I was never able to experience. I want the narrative to change. If I could go back and change the narrative, most of the other painful memories would be eradicated too. The shame I experience would still be there, but there wouldn’t be so much to be ashamed of. The self-hatred would probably still exist, but the intensity might be bearable.

Unfortunately, as much as I want to change my past, I can’t. I have to go full throttle across the canyon. I have to make a “full effort jump” off of a small platform forty feet in the air with nothing else to jump on to. I have to keep moving toward the next telephone pole. I have to keep choosing into EMDR and the process. Challenge by choice.

3 thoughts on “Challenge By Choice”